Through GPlates, users can model the deformation of regions through time by defining the spatial and temporal extent of diffuse plate boundaries. These regions extend, compress and shear, contributing to the relative motion of rigid blocks in the traditional concept of plate tectonics. 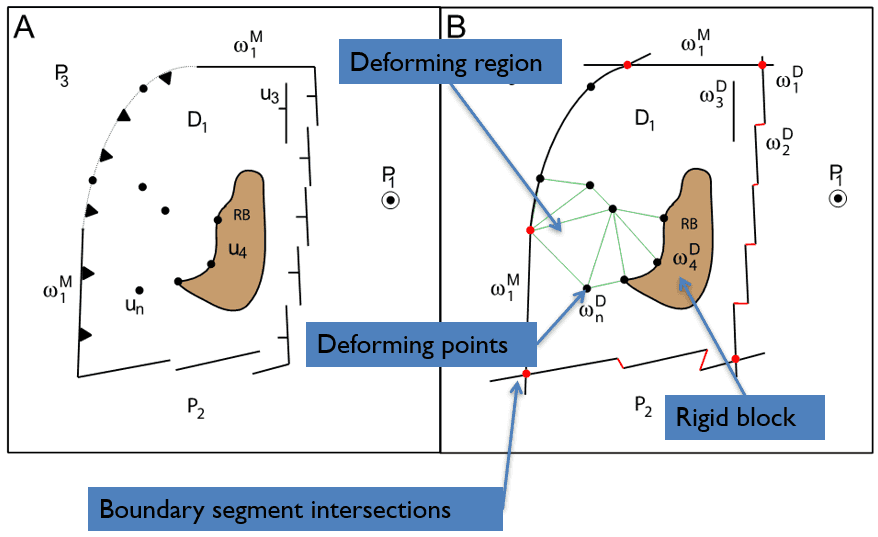 To model the deformation, users must first create a Deforming Network. A Deforming Network consists of a boundary polygon (resolved by intersecting boundary line segments, similar to topological closed plate polygons), optional interior rigid blocks, individual deforming points, and a deforming region (triangulation with vertices from boundary, rigid blocks and deforming points). Once the deforming network has been created, the user can then map the temporal crustal thickness evolution, the crustal stretching or thinning factor, strain rate variation, or degree of tectonic subsidence. The geometries of the regions change over time in regard to the kinematics defined by the user, producing results quantifiable by the stretching/thinning factors.

A deforming network can be created from existing polylines such as plate boundaries or faults or can be uploaded from a .gpmlz file.

To create a deforming network using existing polylines, navigate to the

. This tool has inbuilt feature selection, so all you need to do is select a polyline you wish to contribute to the boundary, and then select "Add to Boundary" under the Topology Tools dialog. Continue clockwise, adding each polyline you wish to the boundary untill you have a Closed Topological Feature. Then click "Create Feature" and follow through the dialogs to create the final Deforming Network, specifying the purpose, time span, adding new properties, or altering existing properties.

To begin with this feature, you must reconstruct to a desired point in time using their prefered method. Then, you should select a Deforming Network on the globe using the Choose Feature Tool

. You must then reconstruct the globe to the time in which the Network begins (visible in the Current Feature Panel).

Next, you navigate to Features, then Generate Deforming Mesh Points.

The distribution of points fill a region defined either by a polygon boundary or a latitude/longitude extent. The initial crustal point positions are uniformly distributed within the points regions. A random offset can be applied to each position, varying between 0 and 100%. At 100%, each point is randomly offset within a circle of radius half the spacing between points. The density level can also be altered, with points spaced roughly 20 degrees apart at level zero. The spacing between the points halves with each increment of density level. 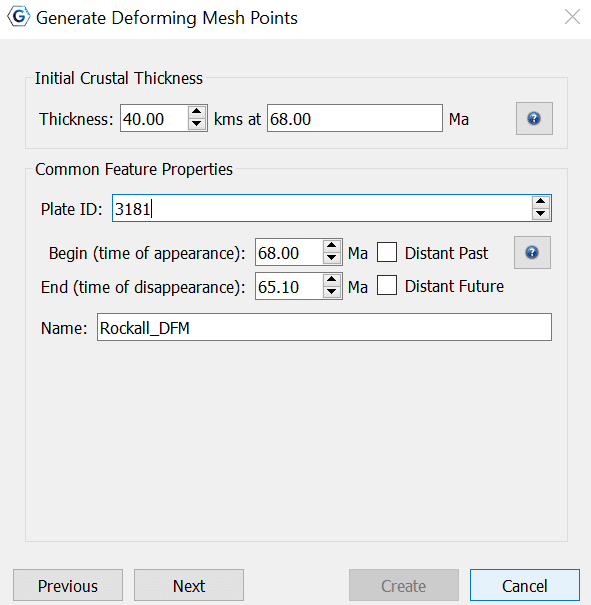 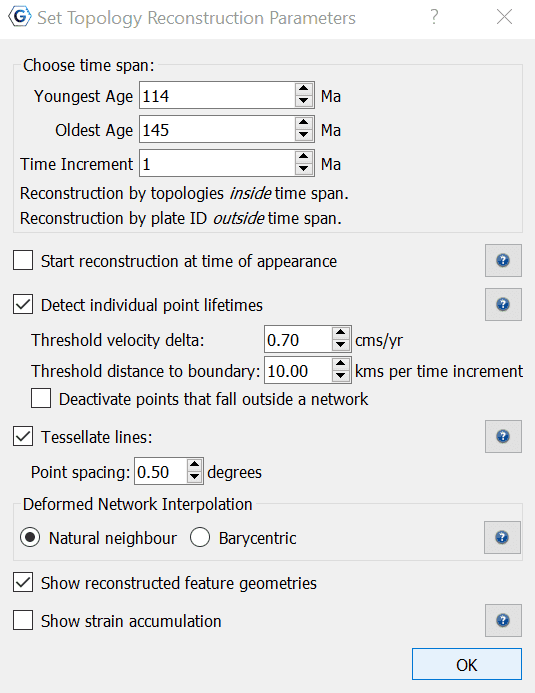 This dialog allows you to set the particular parameters for your topology reconstruction.

3.1.2 Starting reconstruction at time of appearance

If you choose to have the lifetimes of individual points detected, then they can disappear when they are:

Otherwise the points never disappear and are just propagated from one plate/network to another over time.

Polyline and polygon geometries are uniformly sampled into points (rather than retaining the line segments) with a sample spacing that can be controlled, when the option to Tessellate lines is checked.

Points falling inside topological networks deform according to their location within the network's triangulation.

Total strain is accumulated for each point from oldest age of the time span/range of topology reconstruction to the current reconstruction time. If you choose to Show strain accumulation then each point will render the principal components of its strain oriented in the principal directions, with outwards-facing red arrows for extension and inward-facing blue arrows for compression. 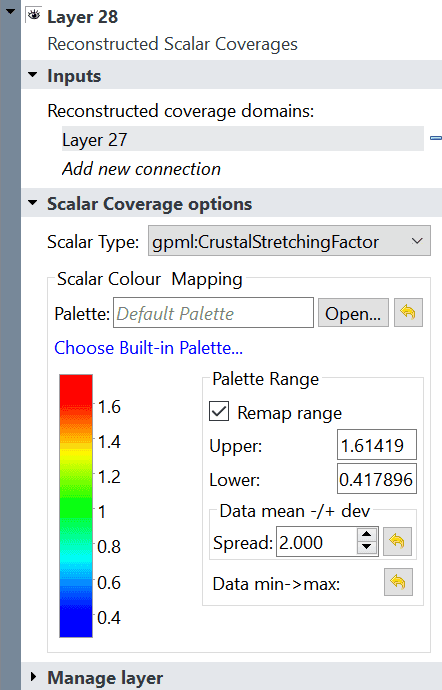 Once the Deforming Mesh Points have been created, a new Reconstructed Scalar Coverages layer is produced. The Deforming Networks temporal and spatial evolution can then be modelled through a variety of Scalar Types.

The Crustal stretching (beta) factor represents changing crustal thickness 'T' according to 'beta = Ti/T', where 'Ti' is initial thickness. Values greater than 1 represent extensional regions and values between 0 and 1 represent compressional regions. This factor starts with an initial value of 1.0 and has no units.

The crustal thinning (gamma) factor represents changing crustal thickness 'T' according to 'gamma = (1 - T/Ti)' (also written as 1 - 1/beta) where 'Ti' is initial thickness. This factor is used because syn-rift subsidence is linearly related to 1 - 1/beta, while beta is not. Values between 0 and 1 represent extensional regions and negative values represent compressional regions. This factor starts with an initial value of 0.0 and has no units.

To avoid the problem of constant stretching across a rifting profile, the user can make it exponential. This is achieved by adding more points to the interior of a deforming network and distributing the velocities at these points such that the strain rate varies exponentially (along the stretching direction) from the un-stretched side of the rift towards the rift centre.

This feature works reasonably well for regular rifts (like AFR-SAM). However, for oblique rifts (like AUS-ANT), more work needs to be completed.

To achieve this all you need to do is load in a deforming model and add a 'rift' left and right plate ID to any deforming network (e.g. in the South Atlantic). It doesn't matter which plate is left and which is right (ie, you can swap them). The presence of these two plate IDs is what triggers the rift stretching algorithm in GPlates (on a per-network basis). - See the description of Plate IDs in the Reconstructions chapter for more information as to what they are.

There are also three other parameters (noted below), in addition to the two plate IDs mentioned above, that can either be set on a deforming network feature or just set in the layer. If they are set in both places, then the feature properties override the layer parameters. These parameters can be directly modified to see what effect they have on crustal thicknesses. 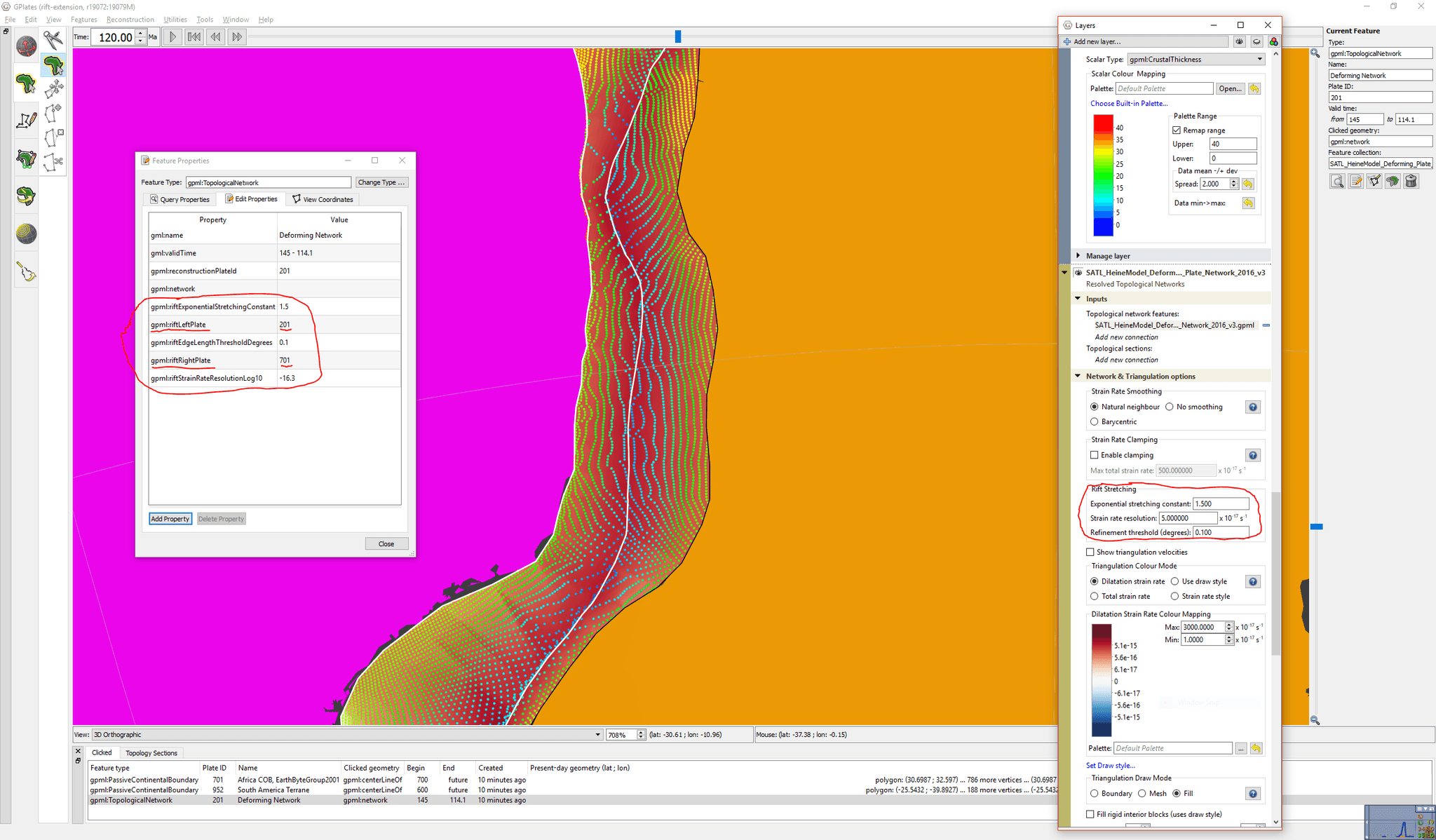