A point is the most basic form of geometry in GPlates and the basis of all other geometries.

A collection of points that move as one. 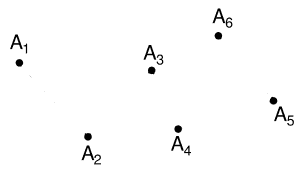 A series of lines drawn end-to-end, forming an open polygon. It is assumed that the lines are non-intersecting. Sometimes in GPlates the direction of a polyline is important, when determining the properties on either side of the line; for example, one side of a subduction zone represents the subducting slab, while the other represents the overriding plate. The direction of a polyline is determined from the "start" of the polyline (the first point digitised) to the "end" of the polyline. 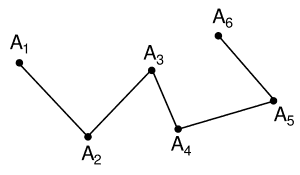 A series of lines drawn end-to-end, forming a closed shape. It is assumed that the lines are non-intersecting. 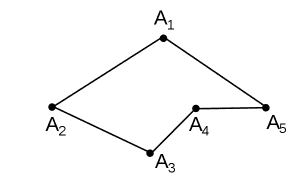 The geometry-editing tools are Canvas Tools and can be found in the Tool Palette. To begin editing geometries it is first necessary to either:

Each geometry-editing tool is only enabled if there’s enough geometry for it to make sense to use that tool. For example, if you are digitising a polygon and have digitised three points so far then the Delete Vertex tool will be disabled because it doesn’t make sense to have a two-vertex polygon (polygons require three or more vertices).

Once you have selected a feature, its properties will appear in the Current Feature Panel. Little dots will appear on the chosen feature geometry, representing the vertices and can be positioned to a new location. The changes made to the geometry are immediate and there is no need to press an "Apply" button.

If the current geometry is a polyline or polygon, when the user clicks on a line, a new vertex is inserted at that position on the line. The line will highlight yellow when the mouse is close enough to the line to insert a vertex. This vertex may then be dragged to a new position, using the move vertex tool.

The Insert Vertex tool can also be used to extend a polyline at either end. If you move the mouse such that it is closer to one of the endpoints than any other point in the polyline then you can see visually that a subsequent mousse click will extend the polyline by one line segment. The same applies to a polygon except the two endpoints are now the first and last vertex of the polygon and the line segment between the last and first vertex will be replaced with two line segments that link the first and last vertex with the inserted vertex.

If the current geometry is a multi-point, a new point will be created at the click-position.

When the user clicks on a line the clicked geometry will be split at that point into two geometries. The line will highlight yellow when the mouse is close enough to the line to perform a split. After the split the original feature will contain one geometry and a new feature will be created to contain the other geometry. Both features will have the same properties and will only differ in their geometries (and their feature ID which is their uniqueness identifier).

In the Feature Properties Dialog

The controls for directly editing the coordinates used by geometry appears as a table with Lat, Lon, and Actions columns. Click a row of the table to select it, and the following action buttons will appear:

Insert a new row above

Insert a new row below 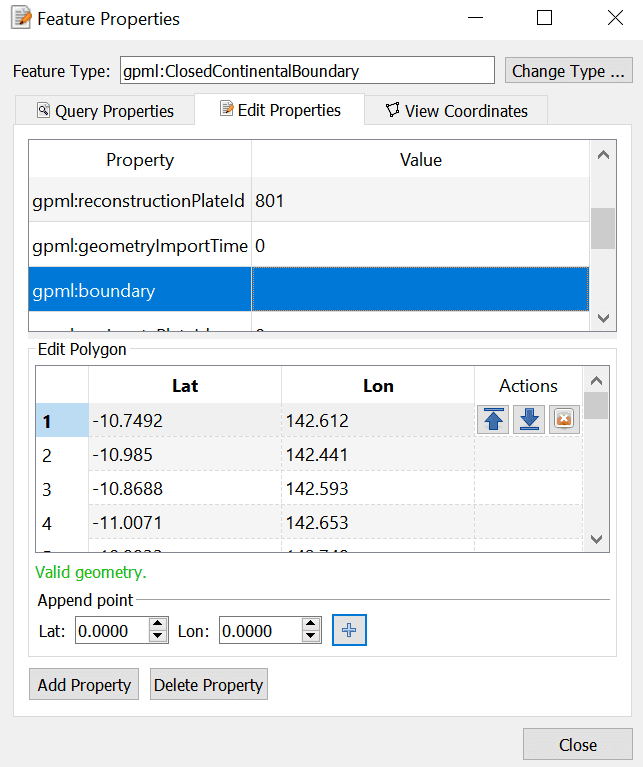