The motions of tectonic plates through geological time may be described and simulated using plate-tectonic reconstructions. Plate-tectonic reconstructions are the calculations of the probable positions, orientations and motions of tectonic plates through time, based upon the relative (plate-to-plate) positions of plates at various times in the past which may be inferred from other data. Geological, geophysical and paleo-geographic data may be attached to the simulated plates, enabling a researcher to trace the motions and interactions of these data through time.

Geological time instants in GPlates are measured in units of Mega-annum (Ma), in which 1 Ma is equal to one million years in the past. For example, the allowable range for reconstructions is from 0 to 10 000 Ma (i.e. present day to 1010 years ago).

As discussed earlier in this documentation, GPlates uses the concept of a Plate ID to ascribe tectonic motion to a feature. All features using the same plate ID move in unison when reconstructed back through time. A plate ID is a non-negative whole number. Assigning specific meanings to specific plate IDs, such as making plate ID 714 correspond to northwest Africa, is up to the creator of the rotation file.

Euler’s Displacement Theorem tells us that any displacement on the surface of the globe can be modelled as a rotation about some axis. This combination of axis and angle is called a finite rotation. Finite rotations are used by GPlates as the elementary building blocks of plate motion.

A sequence of total reconstruction poles is used to model the motion of a single plate across the surface of the globe. The total reconstruction poles describe the relative motion between each plate, but ultimately this motion has to be traced back to a single plate ID which is considered "anchored". GPlates calls this the Anchored Plate ID. Generally, this plate ID corresponds to an absolute reference frame, such as a hotspot, paleomagnetic, or mantle reference frame. The convention is to assign the anchored plate ID to 000, but GPlates allows any plate ID to be used as the anchored plate ID.

To create the model of global plate rotations that is used in GPlates, total reconstruction poles are arranged to form a hierarchy, or tree-like structure. At the top of the hierarchy is the anchored plate ID. Successive plate IDs are further down the chain, linked by total reconstruction poles. To calculate the absolute rotation of a plate ID of a plate with a given plate ID. (relative to the fixed reference defined by the anchored plate ID, at a given time), GPlates starts at that point in the hierarchy and works its way up to the top - to the root of the tree. 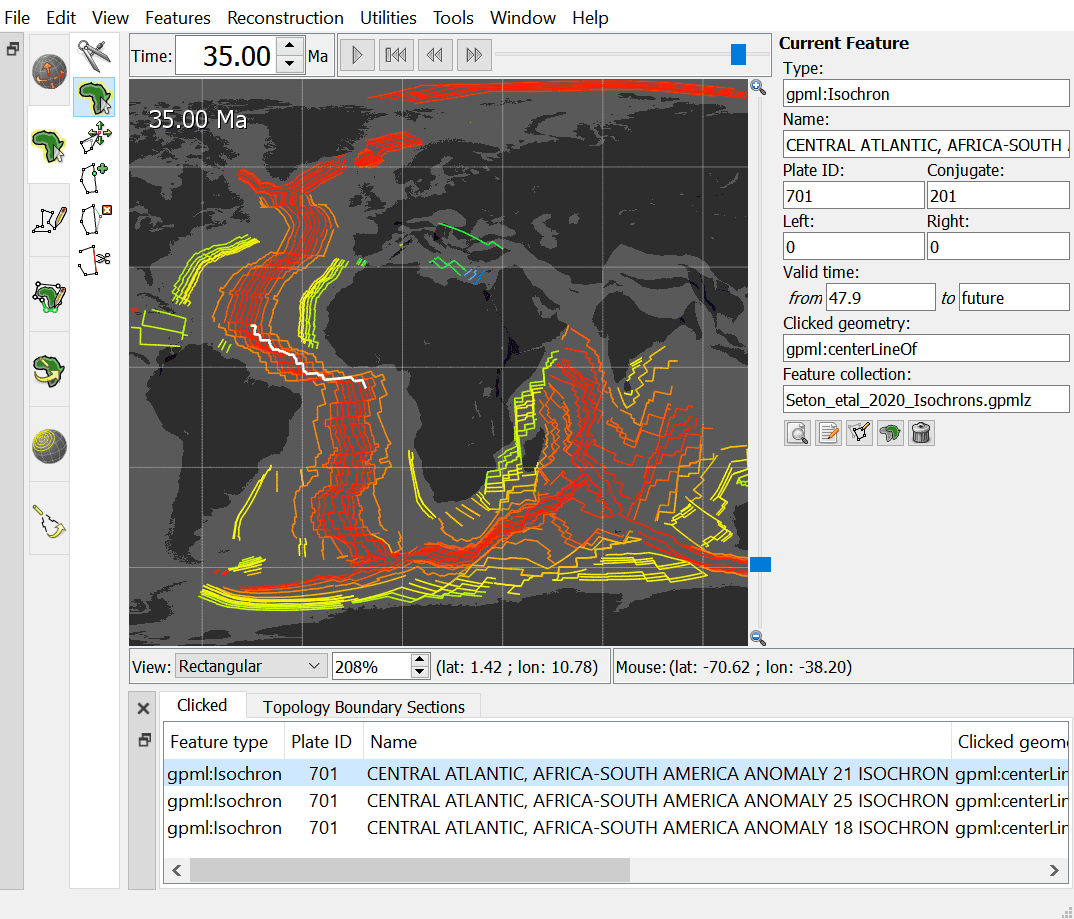 Interface to interact with reconstruction animations in GPlates, discussed in further detail below.

Starts animation, when pressed it changes to the pause button

Halts animation, when pressed it changes to play button

Returns animation to the start time

Step forwards one frame in the animation

Step backwards one frame in the animation

These buttons are used to change the current reconstruction time that you are viewing in small steps. Pressing the buttons once, or using their shortcut keys (Ctrl+I for forwards; Ctrl+Shift+I for backwards) will adjust the reconstruction time by one frame. The time interval between frames can be adjusted via the Configure Animation Dialog, accessed via the Reconstruction menu.

The forwards and backwards buttons apply relative to the current animation time. Normally, the present day (0 Ma) is at the right-hand side of the animation slider, and the distant past is on the left-hand side.

GPlates makes it possible for you to set a reverse animation, where the start time is the present day (or near past), and the end time is in the distant future. When an animation is set up this way, the slider and buttons behave as consistently as possible; your start time (the present) is on the left, and your end time (the distant past) is on the right. Using the Step Forwards one Frame button moves the slider to the right (into the past), and the Step Backwards one Frame button does the opposite, as you would expect.

The Reconstruction Menu provides access to the following tools:

When this menu item is invoked, it will activate the Time field in the Main Window, which is used to specify the current reconstruction time. The user can type a new reconstruction time, or increase or decrease the value using the Up and Down arrow keys or the mouse scroll-wheel, before pressing the Enter key to execute the reconstruction.

This button is used to change the current reconstruction time forward that you are viewing in small steps.

This button is used to change the current reconstruction time backward that you are viewing in small steps.

The Specify Anchored Plate ID command on the Reconstruction menu can be used to change which plate ID GPlates considers to be the globally fixed reference when performing reconstructions. Enter a new plate ID to be the anchor in the dialog that pops up, and GPlates will automatically rearrange the rotation hierarchy so that the specified plate ID is at the top. 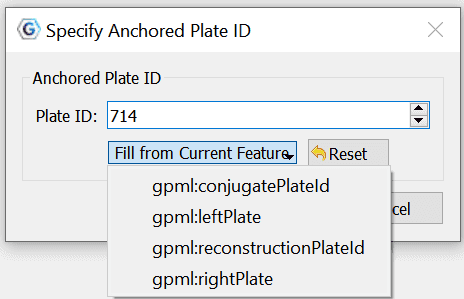 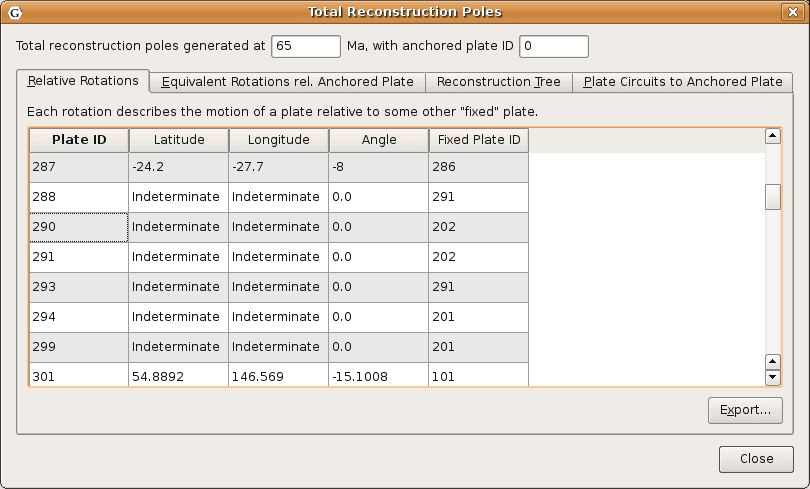 Similar to the Relative Rotations table, this lists rotations for each plate. However, the data presented here has been converted from individual relative rotations into the equivalent absolute rotation, relative to the anchored plate ID. Again, these apply to the current reconstruction time. 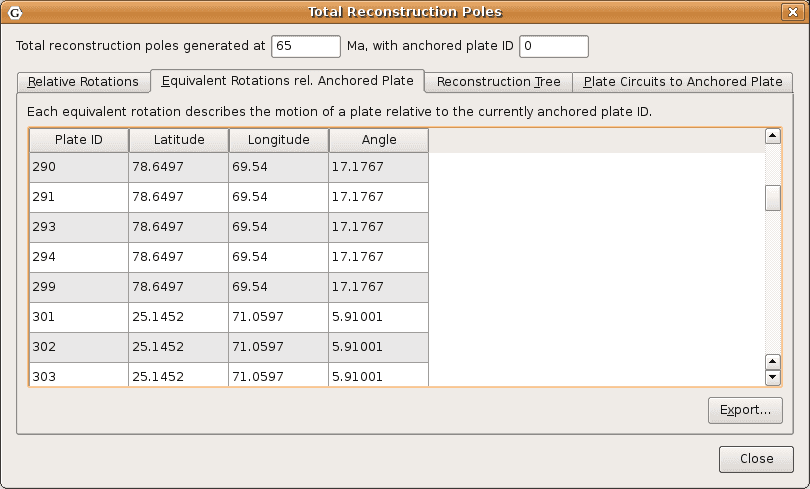 Here the reconstruction hierarchy is presented in a more natural, tree-like form. Relative rotations are listed, but individual nodes of the tree (plate IDs) can be expanded or collapsed, to explore the branches of the plate rotation model. 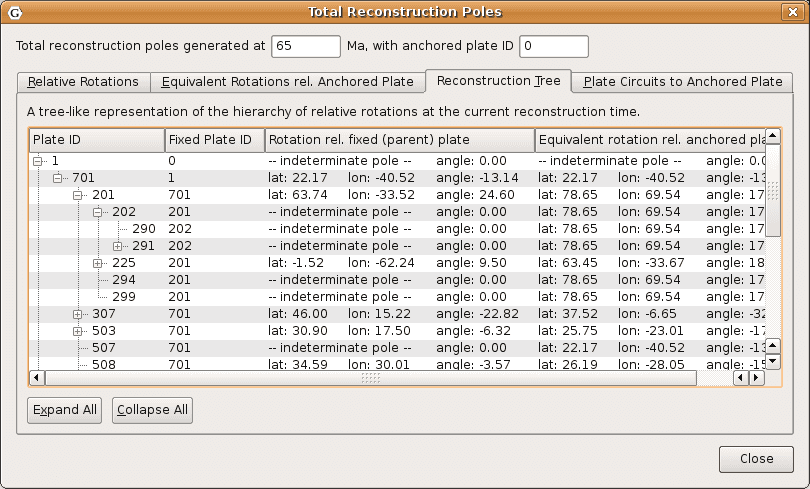 This tab of the Total Reconstruction Poles dialog can be used to trace a series of total reconstruction poles from any given plate ID back to the top of the hierarchy, the anchored plate ID. It is useful to quickly identify the other plate IDs that a chosen plate ID depends on. 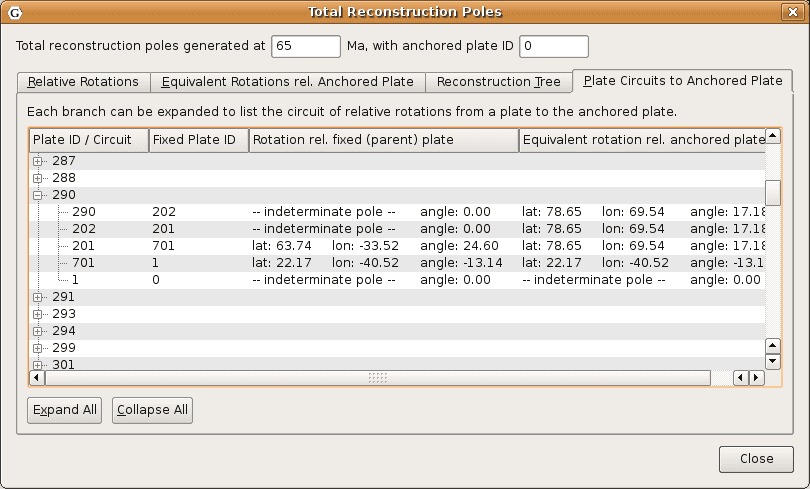 The animation dialog, found in the Reconstruction menu, allows you to automate a reconstruction backwards or forwards through time. The user can set the start and end times by either entering the age or using the current time displayed in the main window. The options, frames per second can be set and there is also the option to loop the animation. 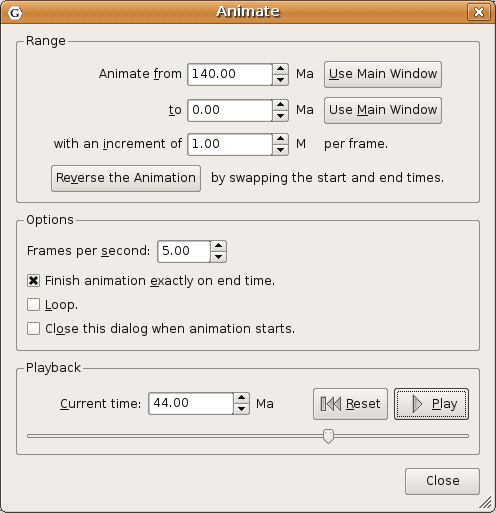 This group of controls specifies the time range that the animation should cover. The Use Main Window buttons are a convenient way of quickly entering the time that the main window is currently viewing.

Additional options to fine-tune the behaviour of the animation are presented here. The Frames per second number controls the rate at which GPlates will limit the display of animation frames when presenting an animation interactively. Larger numbers produce a slower animation.

These controls allow simple playback and seeking within the animation from this dialog. They behave identically to the equivalent controls found in the Reconstruction View.