ESRI Shapefiles are one of the recognised Feature Collection file formats in GPlates. Loading a feature collection from a Shapefile follows the same procedure as any other feature data file - see the Loading and Saving chapter.

Much of this chapter also applies to OGR-GMT and GeoJSON file formats. These formats, along with shapefiles, are all handled by the OGR third-party library.

Shapefile attributes can contain meta-data associated with the geospatial data. This data could specify, for example, the feature’s reconstruction plateID, or the times of appearance and disappearance of the feature. GPlates allows you to specify which shapefile attribute field names will be associated with GPlates feature properties, such as the reconstruction plateID. GPlates records this information on disk so that in subsequent GPlates sessions the last used association will be loaded by default. You can change this association at any time during a GPlates session.

The first time a shapefile has been loaded, you will see the Map File Attributes dialog. 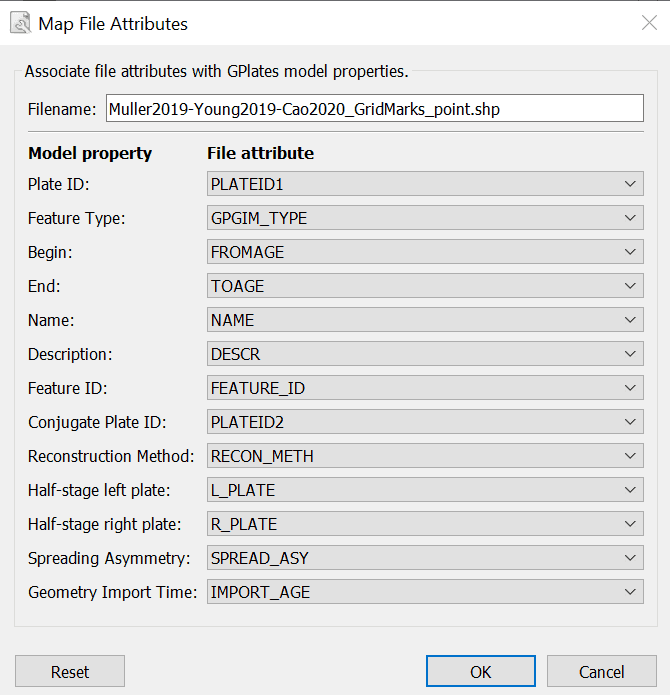 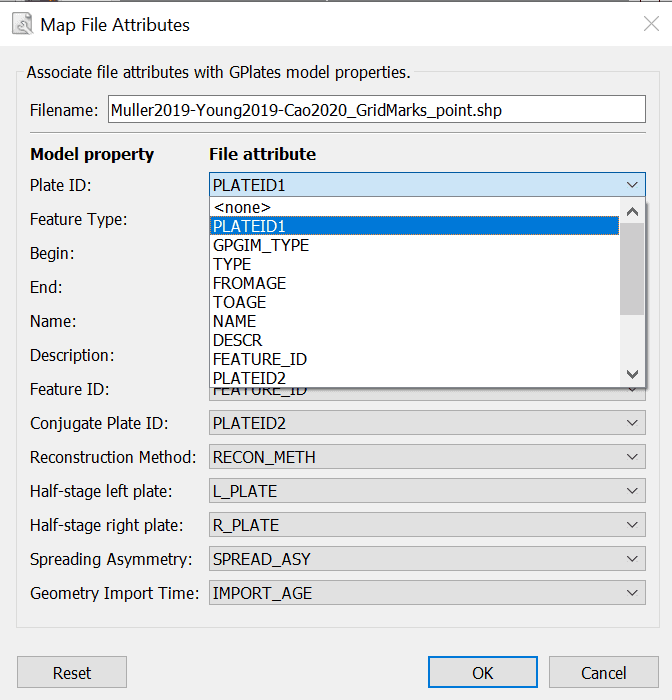 By default GPlates will look for certain file attribute field names, and will initialise the drop-down boxes with the following values:

If the default field name for a feature property cannot be found in the shapefile, the drop-down box will be initialised with <none>.

Once you have selected the mapping you want, clicking OK will load the shapefile.

Once a mapping has been selected, GPlates records this information on disk. If the shapefile was called mydata.shp, the mapping information will be stored in the same folder in a file called mydata.shp.gplates.xml. The next time a user loads mydata.shp, GPlates will look for the file mydata.shp.gplates.xml. If this mapping file is found, GPlates will use the mapping contained in it, and will not force the user to use the Map File Attributes dialog.

The mapping can be reset at any time during a GPlates session.

To reset the mapping for a feature collection:

Shapefile datasets which contain geometries spanning the dateline (180/-180 degrees longitude) can be problematic to view in GIS tools such as ArcGIS (where such geometries might appear rendered with horizontal lines). If desired, GPlates can clip such dateline-spanning geometries to the dateline, making it more suitable for viewing in ArcGIS. (Note that this will also result in geometries being divided up into multiple geometries).

To enable this feature, select the Wrap polyline and polygon geometries to the dateline checkbox at the top of the Edit OGR File Configuration dialog. If this is selected, geometries will be clipped to the dateline the next time the file is saved to disk.

Shapefile attributes can be viewed in two ways:

To view shapefile attributes for a feature collection 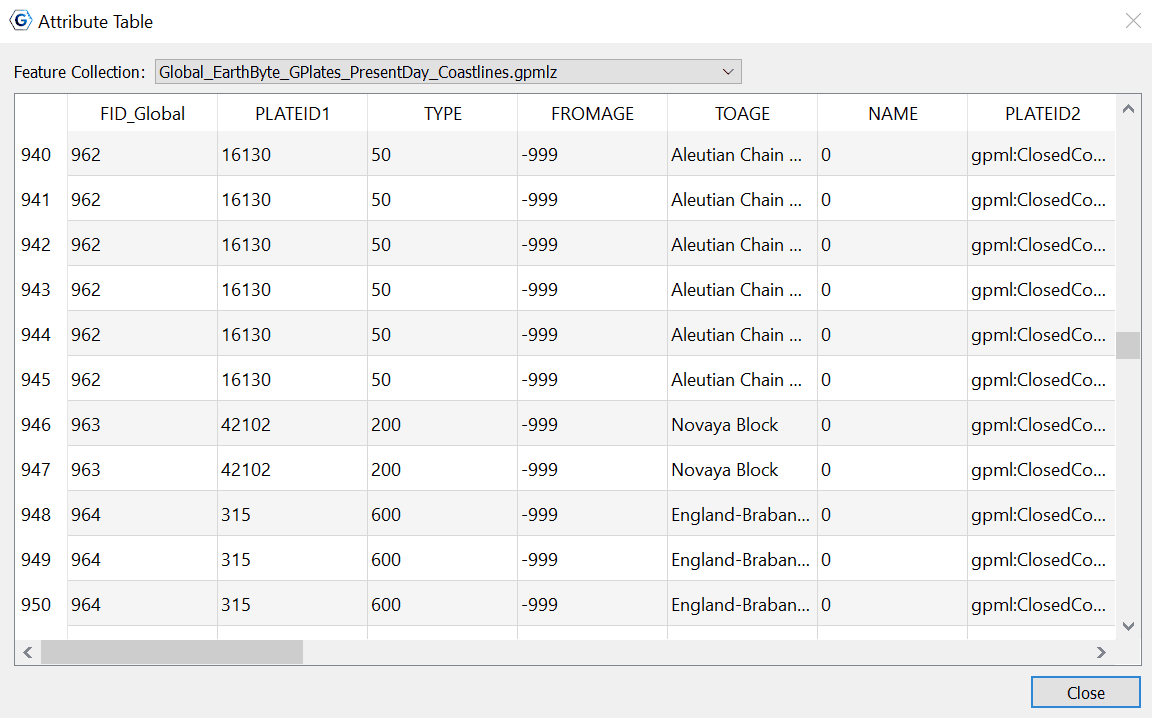 To view file attributes for a single feature.

File attributes for a single feature can be viewed through the Query Feature Properties dialog - see the Interacting with Features chapter.

Shapefile attributes can be edited through the Edit Feature Properties dialog - see the Interacting with Features chapter.

Some shapefiles, and other OGR-supported files, provide a spatial reference system (SRS) along with geometrical and attribute data (see More about the Shapefile format below). Such an SRS can provide information such as scales, projections, and datums, and determines how the geometries are interpreted and displayed on the GPlates canvas. If a shapefile provides an SRS, it will be detected automatically by GPlates. GPlates will internally convert any non-WGS84 SRS into WGS84. If no SRS is provided, GPlates will interpret the data as having a WGS84 SRS.

On saving a shapefile which had a non-WGS84 SRS, GPlates will prompt the user to select either saving in the original SRS, or saving in WGS84.

Data exported from the Export tool are always exported using the WGS84 SRS.

4 More about the Shapefile format

The ESRI Shapefile format is a file format allowing storage of geospatial vector graphics data and metadata. An ESRI Shapefile is a collection of (at least) 3 files with file extensions ".shp", ".shx" and ".dbf". A shapefile called mydata will consist of the files:

Shapefiles will often contain extra files providing additional information; projection and SRS information for example can be provided in ".prj" files. If a shapefile provides SRS data, GPlates will read this information and internally convert the data to the WGS84 SRS (see Spatial Reference Systems above).

The ESRI shapefile specification can be downloaded from http://www.esri.com/library/whitepapers/pdfs/shapefile.pdf.